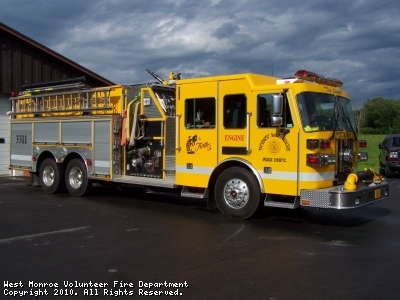 2006 Sutphen Engine - "The Charter"
This is our newest piece of apparatus. It replaced a 1984 E-One engine that was purchased used from the Taunton Fire Department. The new engine holds 2000gal of water and 38gal of foam concentrate on a Sutphen Monarch cab and chassis. The pump is a Hale Q-max 1750gal/min pump with an electronic pump governor. The cab holds four SCBA seats, two non-SCBA seats, the driver/pump operator, and an EMS compartment. The Williams all around class A foam system was specified to provide a means of distributing up to 500 gals/min of foam at 1% concentration. The engine was put in service in June of 2007.

The name "The Charter" is in honor of the charter members who formed the West Monroe Fire Department. It was their willingness to stick their neck out that has given us the opportunity to grow and provide emergency services to the town of West Monroe.
3312

1991 E-One Engine
This was our first brand new piece of fire apparatus. This engine was originally named 3341, but when we refurbished it in 2007, it was renamed to 3312 to more clearly communicate its intended function. It has a 1000 gal water tank and a 1250gal/min Hale pump. The Spartan Gladiator cab holds three SCBA seats, two non-SCBA seats, and the driver/pump operator.
3351 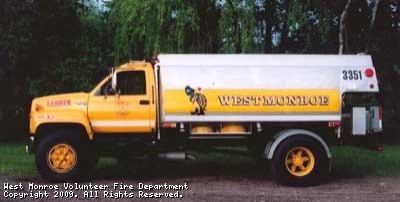 1996 GMC Tanker
Our tanker is built on a 1995 GMC chassis that was purchased new for this application. The tank is a former fuel oil tank that was purchased and re-fitted for its new life as a water supply truck. It has three 10" electric dumps and four 3" storz fill ports with brass flapper valves.
3361

2001 American LaFrance Heavy Rescue
Purchased new in 2001 to replace our home manufactured heavy rescue, this Freightliner F80 rescue responds to all motor vehicle collisions and fires. It carries seven SCBA seats, three non-SCBA seats, and the driver/operator. Along with a host of hand and power tools, it has a 35 kW PTO generator that powers an 11? 9000 watt light tower and many other types of electrical lights and tools.
3363 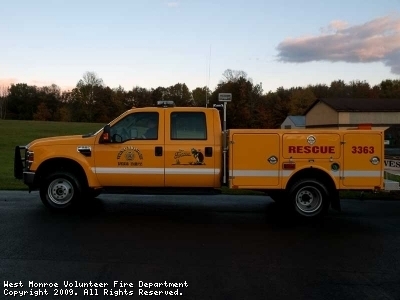 2009 Ford F350
This is a light rescue for EMS and is also a support vehicle for motor vehicle accidents and fires. The truck has seating for 5, 5 compartments, a winch that can be mmounted on the front or rear of the truck and 2 150 watt scene lights.
3371 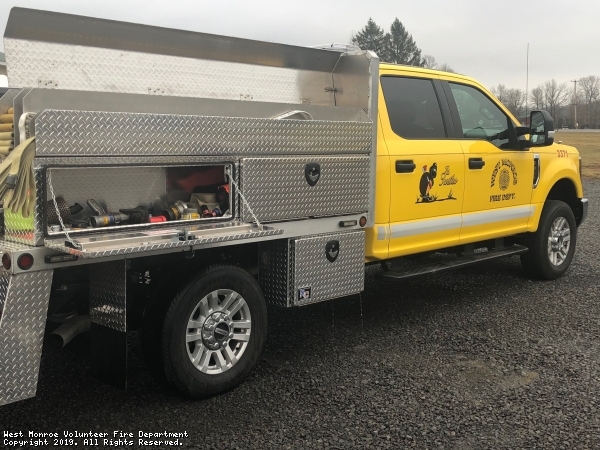 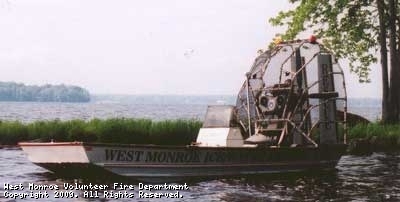 2002 Rivercraft Air Boat
This airboat was purchased to provide a safe method of rescue on the ice/water of Oneida Lake. Weighing in at less than 1000lbs, this boat can go many places that no other vehicle can even attempt to go. It has been used successfully on search and rescue missions in swamps, rivers, and on the thin ice of Oneida Lake. It has also been requested to respond regionally to assist in recovery missions with the State Police. It is a 16? flat bottom boat with a 140hp Hurth aircraft two stroke engine. It is capable of running between ice, water, and snow. During the warmer months, it can easily operate in less than 6 inches of water and climb over various obstacles.
33WR1 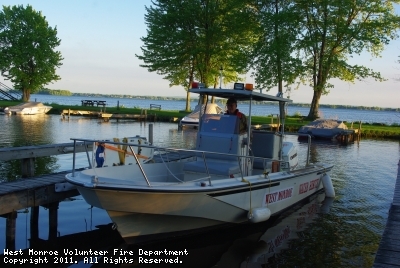 1985 Boston Whaler
The 1985 Boston Whaler center console boat was originally purchased in a joint venture with the Cleveland, Constantia, and West Monroe fire departments to provide a means of protect our common southern response area, Oneida Lake. Over the years, the makeup of the Battalion 3 water rescue has changed as Cleveland and Constantia have both purchased their own rescue boats. At 25 feet long, 38WR1, can handle anything that Oneida Lake can throw at it. Each year, this boat responds to over forty calls for help on the lake.
Facebook Timeline
Upcoming Events
Every 1st Tuesday
ALL DAY
3361 Battery Swaps
Every 1st Tuesday
7:00pm
Monthly Meeting
Every 2nd Tuesday
7:00pm - 9:00pm
DRILL
Apparatus Gallery

Copyright © 2006-2021. YourFirstDue Inc. All Rights Reserved. Designated trademarks and brands are the property of their respective owners. Content on this web site is supplied by West Monroe Volunteer Fire Department. YourFirstDue Inc. cannot be held responsible or liable for any content, text, pictures, or any other media found on this web site. Maintained by the members and staff of West Monroe Volunteer Fire Department.
Management Login
Powered by